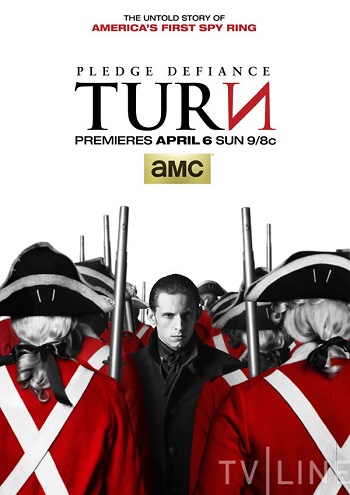 TURN: Washington's Spies is a television drama that premiered on AMC on April 6, 2014. The series is set during The American Revolution and is based on Alexander Rose's Washington's Spies: The Story of America's First Spy Ring.

Abraham Woodhull (Jamie Bell), a cabbage farmer in Setauket, Long Island, is recruited to be a spy by American Capt. Benjamin Tallmadge after being caught smuggling goods in the black market. Woodhull and his former fiancee Anna Strong become involved in a spy ring for the Continental Army, finding important information for the Americans as the British hold New York City. Burn Gorman plays Major Hewlett, commander of the royal garrison in Setauket.

The series ran for four seasons and 40 episodes, with the series finale airing on August 12, 2017.