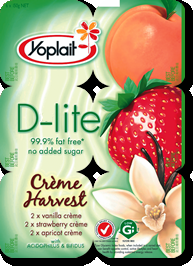 D-Lite Crème? Are any of those actual English words?
"...[my son's] diet consists entirely of products which advertise on Saturday morning cartoon shows and which, for legal reasons, have their names spelled wrong (Noo Creemy Choc'n'Cheez Lumps O'Froot)."
— Dave Barry
Advertisement:

The implication of qualities or ingredients in a product that aren't there because of certain words or spellings of words that vary from the standard. This is usually done to get around government regulations on truth in advertising laws. This is how you end up with products like fruit "punch" when a drink contains no actual fruit juice, "choc" or "choco" when something contains little to no actual chocolate, and "creme" spread that contains no dairy cream. The intent of the law was to prevent advertisers from using words like "chocolate" and "cream" to describe products that didn't contain the ingredients mentioned, but the feds didn't count on consumer illiteracy; too many people now assume that "froot with choco creme" is the same thing as "fruit with chocolate cream", and assume they're getting vitamins, minerals, and flavor they really aren't. And advertisers happily take advantage of it.

Consumers during the age of mass food production in the 19th century lobbied against artificial foods being sold alongside "normal" food and demanded such food be distinctly labeled; margarine, for example, received a push to be dyed pink so consumers would not confuse it for actual butter, and for a while it was illegal in some places to sell margarine that was dyed butter-yellow (it's naturally white, and even today, margarine is dyed bright yellow whereas natural butter is pale). Company lobbyists learned using Lite Creme was an easy escape, as no one wanted an ominous "artificial" label on their product. Official nutritional labels on products are somewhat more informative, though overly technical writing can obscure this for the same reasons. Ingredients being listed in decreasing order does not specify actual amounts, nor does the use of several names to indicate variations on essentially the same ingredient.

Lite Creme products may in fact taste like "normal" foods anyway, and brands being sold directly as food replacements (such as vegan) directly advertise as such. In general, as All-Natural Snake Oil can tell you, there's nothing particularly wrong with something being a processed food in and of itself, and things that are "natural" can be just as unhealthy as Froot Choco-Cheez. Generally though, Lite Creme in the public image brings to mind bizarre concoctions of usually unhealthy additives. See also Asbestos-Free Cereal and The Coconut Effect.