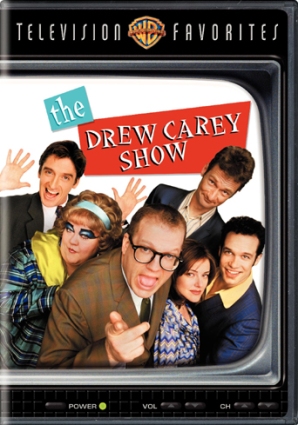 Drew is the perpetual everyman who can never seem to get ahead in life. Bad things never stop happening to Drew. He still hangs out with his friends from high school, Lewis, Oswald and Kate (who started as purely platonic friends with Drew only to become his later love interest). Also, his dog is crippled.

As part of his job Drew has to deal with his Mean Boss, Mr. Wick, and his own perpetually conniving secretary, Mimi, both of whom hate Drew's guts just because he's there. And that is all on top of general office bureaucracy.

As a result of having more creative freedom due to being uncancellable for a time, the series would go on to become Denser and Wackier as it went on, similar to Night Court (in fact, one episode of The Drew Carey Show had a cameo by Daffy Duck, similar to how Night Court had one with Wile E. Coyote). Later seasons would have Mimi and Drew engaged in prank wars that escalated to the point where Mimi drugged Drew and dropped him off at the Great Wall of China after Drew drenches Mimi's desk in paint and hits her in the face with a cold cream pie. Several episodes were made littered with intentional mistakes pointed out to the audience, which they could tally for a contest (which were often random, over-the-top sight gags, ranging from hairstyle changes, actor changes, characters being replaced by sock puppets, and an entire scene being done in Machinima using The Sims). Other notable silliness includes an episode done mostly in improv (to spoof Drew Carey's role as host of Whose Line Is It Anyway?), and an episode where Oswald and Lewis are treated by a dentist who is a very over-the-top Dr. Frankenstein parody.

Carey and Ryan Stiles (Lewis) became fixtures for Whose Line Is It Anyway? that also featured several other cast members briefly. Stiles himself was a veteran of the UK show before being cast on Drew Carey.

Sort of a Work Com, but one which focuses on a single character rather than an ensemble.