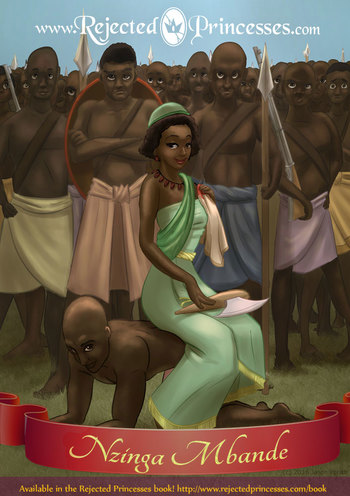 There are many, many ways of illustrating a character's dominance over a setting or a person, from Cool Crowns to impressive thrones, from pimped-out regalia to magnificent palaces. However, for a thorough demonstration of just how much power one has, one of the bluntest methods is to use another living being as a piece of furniture.

In one common form, a servant, lackey or victim is forced to kneel on the floor while their master props their feet up on them like an ottoman. Another popular variant features the victim being made to play the role of a chair and support the weight of their tormentor - with dire consequences if they collapse. Others still may involve the victim being used as stairs, footstools, or even carpets.

Needless to say, this is a technique used almost exclusively by villains and Nominal Heroes of a distinctly sadistic bent, and is often used as an Establishing Character Moment to that end.

May be combined with Too Important to Walk.

Compare and contrast Human Doorstop, the lighter, comedic variant of this trope.