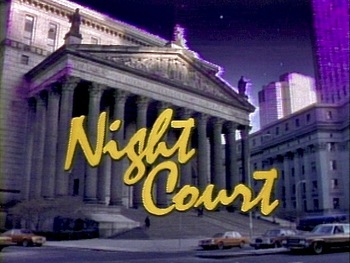 A supremely zany sitcom created by Reinhold Weege, produced by his company, Starry Night Productions (alongside Warner Bros.), and aired on NBC from 1984–92, Night Court followed the goings-on of a night-shift Manhattan arraignment court populated by a madcap band of lawyers, judges, and bailiffs, including (by the end of the series):

The show is usually considered a satire and subversion of the Law Procedural genre, featuring bizarre, wacky crimes, such as groups of rival ventriloquists and their dummies assaulting each other (although the show was also praised for its refusal to deal with violent and "glamorous" crime and called "The most realistic law show on the air" by Time Magazine, no less). Logic and realism were frequently abandoned for the sake of a joke: cartoon animal Wile E. Coyote once appeared in a brief gag

as a defendant. Notwithstanding this, many legal professionals confide that Night Court is far more realistic than most straight Law Procedurals.

The show featured regular guest appearances by John Astin (of The Addams Family fame) as Buddy Ryan, Judge Stone's certifiably insane birth father. Harry Stone's idol Mel Tormé made frequent guest spots, as did Brent Spiner (later famous for his role as Data on Star Trek: The Next Generation) as Bob Wheeler, patriarch of a family of Yugoslavians who pretended to be a hick family from West Virginia and, at one point, even ran a concession stand in the courthouse.

In December 2020, a new series based on Night Court was announced. Owing to Harry Anderson's passing a few years prior, this will be a Spin-Offspring series about Harry's daughter Abby (played by Melissa Rauch).

John Laroquette deserves an Emmy for this scene.

John Laroquette deserves an Emmy for this scene.