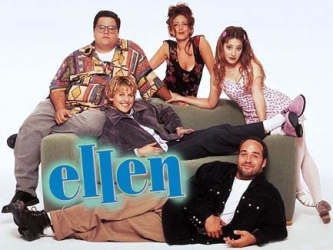 Ellen (originally titled These Friends of Mine) is a U.S. television sitcom that ran on the ABC network from March 29, 1994 to July 22, 1998. It starred Ellen DeGeneres as Los Angeles bookseller Ellen Morgan. Notably, DeGeneres used the series to "come out" publicly.

Not to be confused with DeGeneres's daytime talk show which debuted in The 2000s.