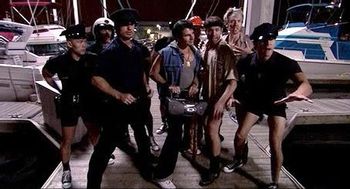 Private strippers show up in sitcomland all the time. Male or female, they come dressed as police officers and are mistaken for them (the protagonist is often accidentally handcuffed to them), while real cops (or some other authority figures) are thought to be strippers, leading the protagonists to rip their shirts off.

Compare Dirty Harriet where a character poses as a sex worker to solve a case. See Mistaken for Clown for a more innocent variant.