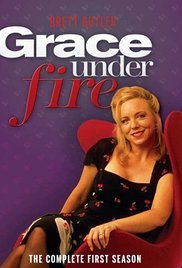 "Grace Under Fire was famous for two things: its blue-collar sensibilities that made Roseanne look like Fellini; and the painkillers-and-booze-fueled escapades of its star, Alabaman comic Brett Butler."
— Cracked 6 Beloved TV Shows (That Traumatized Cast Members For Life)

Grace Under Fire is a Sit Comic created and executive produced by Chuck Lorre which was produced by Carsey Werner and aired on ABC from 1993–98 and starred Brett Butler as the eponymous Grace Kelly, with content finding humor in working-class life, single motherhood, and a somewhat redneck sensibility.

Famously hit the skids in its fourth season due to its pill-popping star's on-set antics. Surprisingly, the show limped its way to a fifth season, but was abruptly canceled when Butler's rehab stumbled.