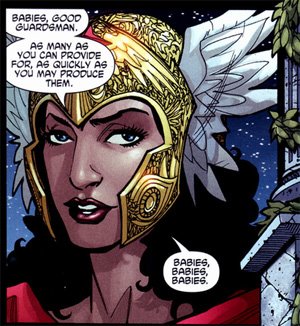 The least subtle version of this ever.
"I will not attempt to pick our son's wife based on whether or not she can feel a pea through a stack of mattresses. Any woman dainty enough to feel a single dried pea through one mattress much less dozens of them, is far too dainty to ever give me grandchildren."
— When I Am the Benevolent Ruler....

So, you've grown up and flown the nest. When you look in the mirror, you see a confident, sassy young woman (usually) with a great career, and everything to be proud of.

Well. Not quite. See, your parents know that the only way you'll truly make them proud is to pop out a few kids of your own, allowing them to live their dream of being grandparents.

The reasons for this can differ from parent to parent. Maybe they really do think the only way for their child to be happy is to have children. Maybe they think the only reason you exist is to give them what they want. Maybe they just want some cute kids to dandle on their knee and show photos of them to strangers. Maybe they need someone to carry on the family name. Maybe they want all the joy of children with none of the responsibility of raising them, or maybe they just want to watch you endure all the torture you gave them. If you want to go by evolutionary psychology on this, the entire point of life (as much as life can be said to have a point) is to produce healthy — and fertile — grandkids, as it means that your genes have passed the test of natural selection.

Either way, you can bet they'll be taking every opportunity to remind their children that their biological clock is ticking, and they should hop to it and make some kids. If the children resist, they can expect to be treated to Not Wanting Kids Is Weird.

Expect things to be awkward if these parents get introduced to a new love interest, or even an opposite sex friend. You can also expect the occasional mention of how the parents spent the child's entire teen years telling them sex is bad, only to turn a complete 180 at some point and suddenly start telling them to get on with it.

If the child is bereaved, this may be one reason why they urge them to seek out a new partner, telling them You Have Waited Long Enough.

This can be Truth in Television, but it's so common that there's no need for Real Life examples.

Note that, despite the above description, this trope is not Always Female. Both male and female examples are straight uses.

Contrast Siblings Wanted, where it's the characters' own children who demand from them to get busy (again) rather than their parents.

I'm Not Getting Any Younger

The King wants his son to marry and give him some Grandkids to spend time with in his twilight years.

I'm Not Getting Any Younger

The King wants his son to marry and give him some Grandkids to spend time with in his twilight years.