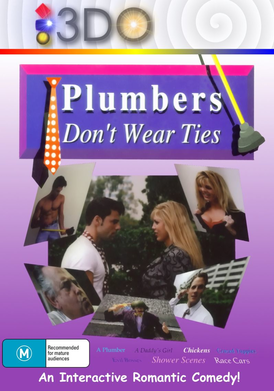 TAKE! YER DAMN! CLOTHES OFF!!!
Plumbers Don't Wear Ties is a text-adventure game which can also serve as one of the few early Western examples of Visual Novels. Released for the 3DO and PC in 1993 by Kirin Entertainment (in their first and second-to-last release), with ports for the Nintendo Switch, PlayStation 4, and PlayStation 5 coming at a later date. The game is a self-proclaimed full motion video game, as they want you to believe. It's actually little more than a slideshow of random events, featuring "a plumber, a Daddy's Girl, chickens, crazed yuppies, evil bosses, pandas, shower scenes, race cars, a nun".note ¿ʇᴉ ʇǝפ
Advertisement:

The plot involves John (played by Edward J. Foster), a plumber who, to avoid his mother trying to hook him up with someone he doesn't like, falls madly in love with Jane (played by former GLOW wrestler Jeanne "Hollywood" Basone), the first woman he meets in an office parking lot. She's there for a job interview with Thresher (played by Paul Bokor), whose idea of acceptable workplace behavior is clearly very, very far behind the times. He chases her, John steps in to save her, she resists the boss's indecent proposal, and they all live happily ever after.

Amid this plot, there are Imagine Spots, more Photoshop filters than you can shake a stick at, and a crowd of dogs applauding the male narrator gunning down his Straw Feminist counterpart.

The Angry Video Game Nerd reviewed this in Episode 74

. It was rather unexpectedly announced at E3 2021 that Limited Run Games would be re-releasing it for PS4, PS5, Nintendo Switch, and PC at some point in the future.