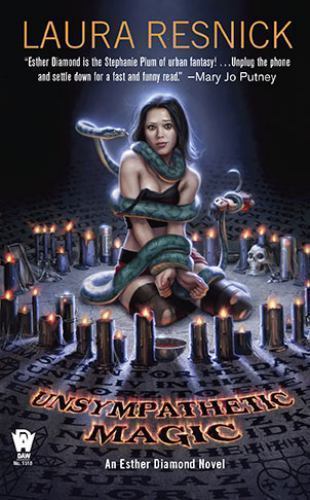 The Esther Diamond books are a comedic Urban Fantasy series written by Laura Resnick. Esther Diamond, an actress in New York, was performing as chorus girl in a struggling off-Broadway show when the musicals leading lady vanishes in a magic act. The incident introduced her to Dr. Maximilian Zadok, a 350 year old mage and New York's representative of the Magnum Collegium, an Ancient Conspiracy dedicated to fighting Evil and upholding The Masquerade.

Since then, Esther's jobs (acting or otherwise) invariably bring her, Max and her sometimes boyfriend, Detective Lopez, involved in supernatural mystical forces.

The series includes 7 books so far, with 3 more announced: