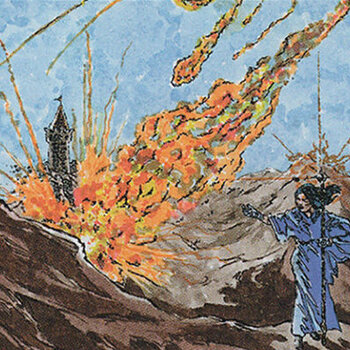 Who needs an army to raid castles when all you have is a bunch of flaming, high-velocity rocks?
"O countless particles that wander the very heavens, rain down and glorify the land... Meteor Storm!"
—Rita Mordio, Tales of Vesperia
Advertisement:

Meteors falling through the sky are seen as the epitome of raw power and destruction. Whether be it one big meteor or a bunch of little ones, no matter their size and scope, they're sure to give anyone a bad day, especially if they're weaponized and called forth to rain down oblivion on one's foes.

Meteor Summoning Attacks are, as the name says, attacks that summon meteors onto enemies. They usually come in the form of either abilities that characters can learn (often as spells or superpowers), usable items that get consumed on use or are tied to powerful artifacts like a Cosmic Keystone or a MacGuffin. Historically, spells used to summon meteors are seen as Stock RPG Spells and are amongst the most powerful and damaging abilities available. You can thank Dungeons & Dragons for setting that trend amongst tabletop RPGs and Final Fantasy for setting the trend amongst computer RPGs. When a villain or non-player character has an ability like this, it is generally a sign they are incredibly powerful.

The amount of collateral damage these meteors can cause varies depending on the moral alignment of the characters who use them. For the heroes, they very rarely cause any significant damage to their surroundings, often resulting in No Endor Holocaust scenarios where only the foe being targeted by the attack is harmed (this is typically Hand Waved to avoid instances of What the Hell, Hero?, Nice Job Breaking It, Hero, and Designated Hero). For the villains, however, their usage of the attack will almost always cause utter destruction of their surroundings to show that they mean business and may result in scenarios such as Doomed Hometown, Salt the Earth, and even World-Wrecking Wave at its most extreme. Generally, attacks involving a large number of smaller meteors tend to take the form of thorough carpet-bombings, while single-meteor strikes limit their destruction to a specific target. In games, this leads the first kind to usually serve as an Area of Effect type of attack, while single-meteor strikes will target a specific foe or location but are still likely to deal Splash Damage around it.

The meteors may be actual Flaming Meteors or energy-based/magical in nature. If it's the latter, expect Storm of Blades to ensue some of the time. Literal star-shaped objects such as shooting stars can also qualify. Can overlap with Colony Drop if it takes place on a very large scale.

Sub-trope of Death from Above. Compare Rain of Arrows and Storm of Blades, which operate on similar concepts. See also Orbital Bombardment for when characters or factions attempt an all-out assault on their enemies from space using any weapons available, which may include meteors. If summoning meteors is an elemental attack, it will most often use fire, earth, light, or darkness. Ice and especially wind are far more rare but not completely unheard of. If a setting has a separate "star" element, meteors are all but guaranteed to fall under it.

Important Note: To be an example, the meteors must be used as a deliberate attack against foes, either intentionally or unintentionally (for cases of reactionary, blind rage, or panic mode attacks). Plain-old "accidentally perturbed the trajectory" scenarios, natural disasters, and passive stage hazards in the case of video games where no character is responsible for, do not count.

Thanos uses the Infinity Stones to throw pieces of the moon at the heroes.

Thanos uses the Infinity Stones to throw pieces of the moon at the heroes.