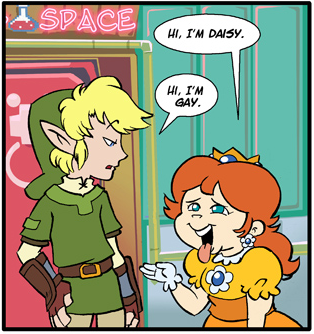 We never actually find out if he really is.
Advertisement:

An admirer (possibly abhorrent) is putting the moves on someone who clearly has other plans. They rebuff the other's advances by simply saying "Sorry, I'm gay", regardless of their true sexuality. This trope is meant to be gender-neutral but for some reason, "Sorry, I'm a lesbian" usually just doesn't work as well (not that "Sorry, I'm gay" works all of the time for men either). And saying "Sorry, I'm asexual" just gets confused stares.

A subtrope of Ignore the Fanservice. The opposite of Mistaken for Gay. Not to be confused with Faux Yay, which is a behavior, while this is just a quick way to halt the seduction in progress but one can lead to the other.

A sub-trope of You're Not My Type. See also Incompatible Orientation, when the person is actually telling the truth. Compare to All the Good Men Are Gay, Last Het Romance, and Dude, She's a Lesbian. Sister Trope to Seduction-Proof Marriage, which is when the character rebuffs the unwanted advances because they're in a committed relationship. This can serve as a Queer Establishing Moment if they're indeed telling the truth.

Alternative Title(s): Sorry I Am Gay