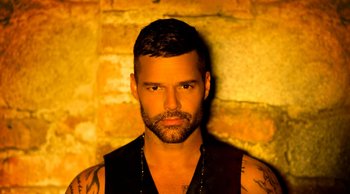 Livin' la vida loca since 1999.
Enrique Martín Morales (born December 24, 1971), better known as Ricky Martin, is a Puerto Rican singer, actor, and author. His career began at age 12 as a member of the Boy Band Menudo, but he has since released several solo albums throughout the 1990s. He has also achieved modest stardom on stage and television in Mexico, and appeared on the American soap opera General Hospital in 1994 as, ummm... a Puerto Rican singer.
Advertisement:

His musical career received a second kick in the backside in early 1999, when his performance of "Cup of Life" at the 41st Annual Grammy Awards brought Latin pop to the attention of the U.S. music scene.

Note: Albums released during his tenure with Menudo will be listed on that page.
Advertisement:

His music contains examples of: