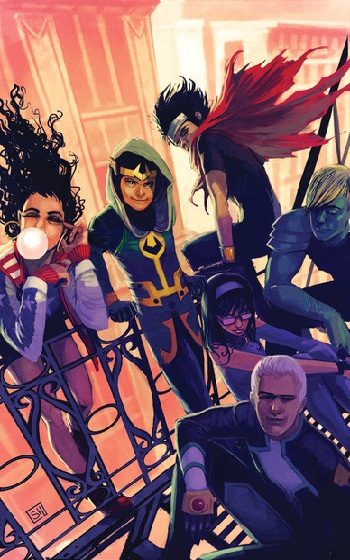 The Avengers' main young heroes team, equivalent to The DCU's Young Justice or Teen Titans. Created by Allan Heinberg and Jim Cheung, the team debuted in Young Avengers #1 in 2005 and aimed for young adult readers, but still contained enough Darker and Edgier material for older readers as well.

Following the first volume, the team starred in a bunch of minis before appearing in Heinberg's promised "season two", Avengers: The Children's Crusade. Volume 2 was released as a part of the Marvel NOW! relaunch, this time in the hands of acclaimed Phonogram and Journey into Mystery (Gillen) writer, Kieron Gillen, and his long time collaborator Jamie McKelvie. The story is set a year after The Children's Crusade and introduced three new members: Marvel Boy (Noh-Varr), Miss America (America Chavez) and Loki. The run lasted 15 issues, ending when the creators wanted it to rather than being cancelled.

Appearances of members in other comics

The series has a character sheet

See also Avengers: The Initiative and Avengers Academy for other Avengers young teams. For X-Men equivalents, see New Mutants, Young X-Men, New X-Men, Generation X, Wolverine and the X-Men (Marvel Comics) or The original X-Men team. For a team of young people related neither to The Avengers nor to The X-Men see The Runaways. Also, see Avengers Arena for the other comic about super powered teenagers (and complete opposite to this series) in the Marvel NOW! relaunch.