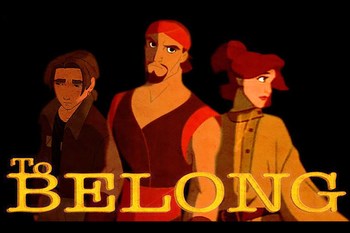 To Belong is a series of fanvideos by Youtuber TheNamelessDoll blending the animation of many different animated films to tell an original story in a style known as animash.

In a World… where all humans have Animorphism, there is a trio of poor siblings who live together: Fifteen year old Jim, nineteen year old Anya, and twenty-three year old Sinbad. The family goes off into the world and finds themselves ending up as the escorts of Charming. Charming claims he'll pay them once he gets back home... but there is more to his situation than they expected.

The series started out as a fanvid crossover series before later being expanded into its own web series.