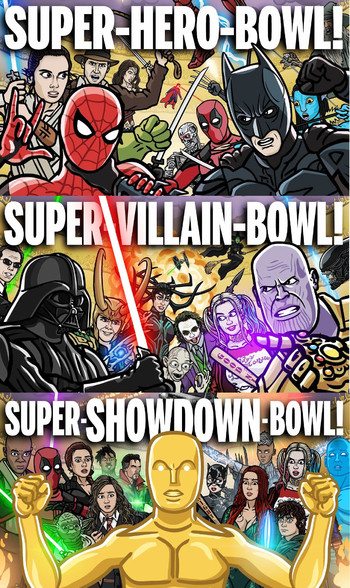 Thumbnails for Hero, Villain and Showdown
"Arise, warrior. The battle is about to begin."
Advertisement:

" is a video created by ArtSpear Entertainment as part of their Toon Sandwich series, created using Adobe Flash and After Effects, and debuted in January 2017. The video is over 10 minutes in length, and features several cameo appearances of numerous protagonists and heroes from various movie and television franchises. Production on this video first started around June 2016, when the ArtSpear Entertainment staff began recording dialogue.

The video aims to answer one of the most commonly debated question of all: Who is the ultimate hero? In a comedic free-for-all, that's what the combatants are forced to find out as they are all pitted against each other in a battle of life and death. As of the creation of this page, the video has garnered more than 5 million views on YouTube alone.

", was released in April 2018. It follows the same premise as its predecessor, except this time featuring an ensemble cast of well-known villains from film and television, adding more humor and more bloodshed. Unlike the first installement, however, it also adds more of a backstory to the events being played out.

" was released, featuring the participants of the first two death matches (plus a few new faces) teaming up to take on the Oscar being forcing them to fight in the first place.

In December 2020, the first installment of a sequel series, FANFICTASIA, titled "FANFICTASIA - Episode 1 - The Phantom-like Menace

open/close all folders
In General
Super-Hero-Bowl!
Super-Villain-Bowl!
Super-Showdown-Bowl!
webline, the Ancient One with a portal, Hela with a summoned sword, Black Panther with claws, a Xenomorph with a deadly tongue, Batman with a batarang, and three katana-wielders with a katana-shaped blade. He also takes down two Quicksilvers and the Flash with Super Speed and cuts off Ash's chainsaw hand with one of his own. Oh, and he takes out Elektra with lightning.
Fanfictasia
Feedback

With arms and legs restrained, Oscar grows a third arm to catch an arrow with the One Ring (made of his weakness: gold) on it.

With arms and legs restrained, Oscar grows a third arm to catch an arrow with the One Ring (made of his weakness: gold) on it.