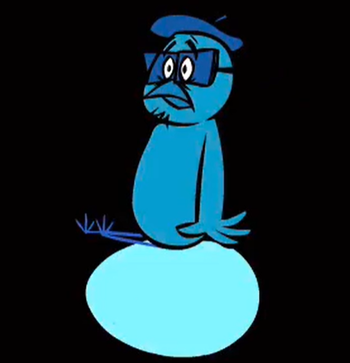 It is a well known fact that females of many species lay eggs. In more humorous (or simply more creatively liberal) works, it is expected that any animal of that species will have the ability to lay eggs. This often occurs even if the animal in question has been established to be, or otherwise evidently is, a male. Some works will treat this as perfectly normal, while other, more self-aware ones may hang a lampshade on it, but it will generally not be dwelled too much upon.

This might sometimes be used as a simple way to get eggs involved in a plot, as their presence can lead to much humorous antics such as pranking or them being thrown. Other times it will be used as a relatively less disgusting version of a Bowel-Breaking Bricks gag.

A form of Animal Gender-Bender. Sister Trope to Lactating Male. Compare Mister Seahorse for when a biologically male character is revealed to somehow be pregnant, which can come in many forms, including mammalian. If a presumed-male animal is discovered to be female after laying an egg, that's Your Tomcat Is Pregnant. If a creature laying eggs is unrealistic even besides sex, it's Whale Egg.