Webcomic / Breakfast of the Gods 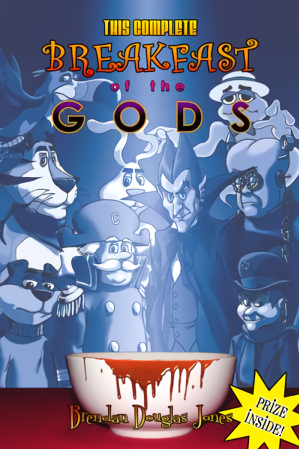 Part of a well-balanced apocalypse.
Advertisement:

Breakfast of the Gods is a completed Webcomic by Brendan Douglas Jones in three volumes, best described as Watchmen played out by breakfast cereal mascots. The comic disappeared from the internet without warning some time in mid-late 2013, probably due to copyright/trademark infringement concerns, then reappeared on a dedicated site

, which has been taken down and restored a few times over the years. Currently (June 2022) it's down, but it can also be found on archive.org. It is also available as a print-on-demand book containing all three volumes

in 8.5 x 11 inch format. Likewise some fans have got it saved as a PDF file, you can find it here

The Honey Nut Cheerios Bee's corpse washes up on a beach and all fingers point toward Count Chocula as the perpetrator. Snap, Crackle and Pop disappear shortly thereafter, and Cap'n Crunch and Tony the Tiger investigate. What eventually ensues is an all-out war for the fate of Cerealia, waged between the heroic defenders of everyone's balanced breakfast and the villainous denizens of the night as well as their extraterrestrial allies, the dreaded Soggies.