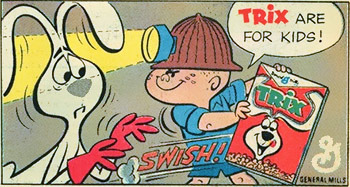 "For a long time it gave me nightmares...
...Having to witness an injustice like that.
It was a constant reminder of how unfair this world can be.
I can still hear them taunting him...
'Silly Rabbit, Trix are for kids'.
How come they just couldn't give him some cereal?"
— Carlton Banks, The Fresh Prince of Bel-Air, "Boyz in the Woods"
Advertisement:

For all the struggles over making sure normal television shows have "positive influences", commercials seem exempt from this.

Nowhere is this more obvious than in children's breakfast cereal commercials. Children are rewarded for being brats, for discrimination, for theft, and a number of other deadly sins. Often times they even torture cartoon characters who only want a bowl of cereal, and why? For their own sadistic amusement. It's only a matter of time before they get rewarded for being "cereal killers".

The main message seems to be that, as long as it helps you acquire their cereal, the ends justify the means. Interestingly, the fact that it's the adults who buy the kids the cereal is completely lost. This may be because they're expected to not be watching.

The Aesop gets even more Family Unfriendly in that the cereals are usually portrayed as so addictive to the mascots and/or kids as to earn them a top spot on the Controlled Substance list. Hard drugs: part of photographed next to this balanced breakfast!

Although the description above mentions cereal as an example, this trope actually applies to all commercials where this kind of behavior occurs.

For cases where the cereal itself should be suspect to close parental scrutiny (but somehow isn't), see Chocolate-Frosted Sugar Bombs.

The Power of Cheese is when the means used to acquire the product aren't as dark.