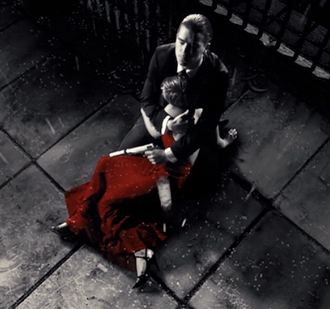 The rain can't wash away all that red.
"You win... but I must admit... I'm happy. I never thought that I would die with someone holding me."
— Mei Ren's last words, Dance in the Vampire Bund
Advertisement:

There are few ways that more viscerally convey love and loss than the Pietà Plagiarism, where an unconscious or dead character who has been harmed at the hands of an enemy is cradled in the arms of a loved one. Which is why this gets really weird when it's the killer who does the cradling.

The murderer will gently hold and comfort their dying victim, caress their face, perhaps gently kiss them. They'll offer advice to reduce pain, explain how they're dying so they don't panic, make an Empty Promise about it all being fine, say the pain will end quickly, and tell them to "go to sleep." It's not uncommon for them to offer a sincere apology, and maybe, just maybe... beg for a forgiveness they know they won't get.

A character Cradling Their Kill might do so for various reasons, none of them good. If the killer is a good guy who was forced to shoot the victim, they'll cradle the victim out of love and guilt. Usually it's because of self defense, a Mercy Kill, or because of other forces beyond their control. Likewise, a Hitman with a Heart may consider it a professional courtesy to give their mark a personal send off, so that they don't fear Dying Alone. A Noble Demon who considers the murdered a Worthy Opponent may give their rival this treatment; worth noting is that the murdered can usually extract a deathbed promise from their killer. Another regretful murderer is the Anti-Hero, Anti-Villain, or outright villain who has kicked the morality pet or killed their Love Interest who will cradle their victim as the Heel Realization kicks in. If the cradling happens before the victim is completely dead, they may be forming a Dying Truce.

There are, of course, much less merciful and worthy reasons for a killer to do this. A Combat Sadomasochist may torment their victim by mockingly aping a Pietà Plagiarism, using Terms of Endangerment, or twisting the blade to keep them in pain. A Straw Nihilist may hold their dying victim and tell them they envy them for achieving the "peace" of oblivion. And of course, a murderer going for stealth wants to keep the victim from crying out or audibly hitting the floor.

Poise and verbosity on the part of the victim is optional.

This is a subtrope of Comfort the Dying. One Sub-Trope of this includes the White Void Room; the killer and victim enter the room and engage in a lengthy dialogue where motives, plot points, and Character Development are exposited in a minimalist and rush-free manner. This may be related to My God, What Have I Done?.

Compare and contrast Died in Your Arms Tonight, Cradle of Loneliness and Sympathy for the Devil.