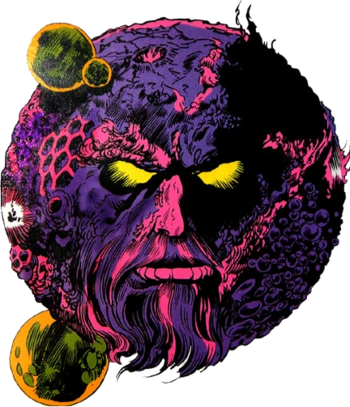 Here I am, brain the size of a planet and they ask me to show you an example of this trope.
"Something about this place feels alive."
— Katara, Avatar: The Last Airbender
Advertisement:

Some people are places. A Genius Loci is a location with a mind. A sentient planet, country, island, city, or street. Obviously, this is more common in Science Fiction and fantasy, though a certain amount of animism in otherwise realistic series isn't unknown, and it may be only suggested.

Usually, the Genius Loci has some control over its own form, and uses that control to communicate with the other characters. Alternately, it can trap them in Alien Geometries and torment them with Living Memories for shoots and giggles. It can be a Hive Mind formed from the various organic life-forms that inhabit a place, a nonphysical being possessing the area itself, a mythological spirit of a locale, or a computer system laced through the brick and stone. It can be helpful, neutral, or antagonistic.

The name comes from the Latin for "spirit of a place", originally a location's protective guardian spirit. To refer to "spirits of places", or multiple locations, each with their own guardian spirit, the correct pluralization is Genii Locorum. For "spirits of a place", or a place inhabited by a Mind Hive, the correct term is Genii Loci. For a "spirit of places", such as an omnipresent being inhabiting many disconnected lands, the term is Genius Locorum.

The Other Wiki has more details on Genii Locorum here

Variants with their own trope pages include Sapient House, Sapient Ship and Intelligent Forest.

See Setting as a Character for when the location isn't actually alive, but is still treated as a character in the work.