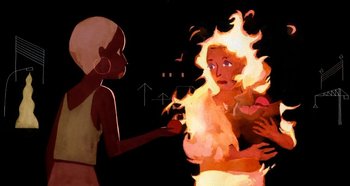 A young black woman, Reine, shares an apartment in a rather run-down urban area with her sister Mouna and Mouna's baby son. Reine complains to Mouna about "your son" creeping into her room. Mouna says that she wants Reine to make dinner and eat with them. Mouna exits, Reine walks over to the dinner table...and things get weird indeed, as the throw rug turns into a trampoline and the glass of water Reine knocks over somehow floods the whole kitchen. Things get stranger and stranger after that, as Reine leaves the apartment and goes on a weird hallucinogenic journey, one in which shapes morph and shift around her, people change form unpredictably, and reality itself seems to be left behind completely.