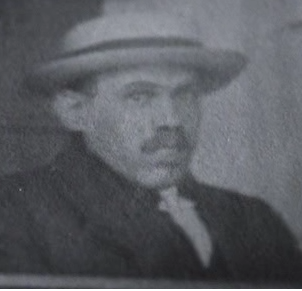 "Do you think I might be fool enough to run away from Heaven, if I get there?"
They have been my companions. They are part of myself, those pictures, long before I knew them I had been such a lonely little boy.
Do you believe it, unlike most children I hated to see the day come where I would be grown up. I never wanted to. I wished to be young always. I am grown up now and an old, lame man, darn it.
Advertisement:

Henry Joseph Darger (April 12, 1892 – April 13, 1973) was an outsider artist and author from Chicago. After losing his parents at an early age, he spent the majority of his childhood in a series of abusive orphanages and insane asylums, and responded by creating an internal fantasy world. At sixteen, he escaped the Illinois Asylum for Feeble-Minded Childrennote "I, a feeble minded kid. I knew more than the whole shebang in that place." in Lincoln, Illinois, and walked 160 miles back to Chicago, finding work there as a janitor in a succession of Catholic hospitals. Apart from a short stint in the US Army during World War I, he lived quietly as a janitor and dishwasher all his life, hardly ever speaking in public and emerging from his apartment only to go to work and Mass. Eventually, he died in a nursing home in 1973. When cleaning out his apartment, his landlords found an immense treasure trove of artwork and stories that Darger had been working on for more than sixty years.

Advertisement:
The majority of his pictures are heroic portraits, ordinary action-adventure scenes, or colorful, flower-filled panoramas. However, the 1% of his output that covered the Glandelinian massacres are the ones that get the most attention. Because these horrific scenes were cut from their bindings and originally displayed without recourse to the contextual narrative, many people didn't know what to make of Darger and some (including a famous psychiatrist) mistook him for a 1930s version of Jeffrey Dahmer. There is no evidence that Darger ever harmed a living soul.

The specifics of his life story and history can be found on That Other Wiki. Fredrik Knudsen

about his life was released in 2004. A second film, Revolutions of the Night

, released in 2012, gives more detail about his background (more about this film and its evocation of Darger as he really was in this essay

). Most of his work is on exhibition at the American Folk Art Museum in New York

with special presentations all through 2017. April 12 has been declared Henry Darger Day

in Chicago and Mayor Rahm Emanuel even signed a proclamation in his honor.

You may read selections from The Story of the Vivian Girls in the Realms of the Unreal, and the entire The Vivian Girls in Chicago, Henry's weather journal and The History of My Life the Illinois State Library website

Some reviewers including Elizabeth Hand have noted similarities between Darger and J.R.R. Tolkien

, right down to their devout Catholicism, losing their mothers in childhood, and being born and dying in the same years — besides both writing self-illustrated fantasy epics in which people of small stature but great courage save the universe from evil.

His gravestone can be found in Illinois. The headstone reads "Henry Darger, Artist and Protector of Children."

Not to be confused with Henry Danger.