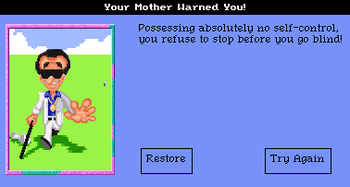 That's what you get for not listening to your mother.
"Father O'Flanagan he was there
And in the corner sat
Amusing himself by abusing himself
And catching it in his hat."
— Ball of Kirriemuir, traditional
Advertisement: