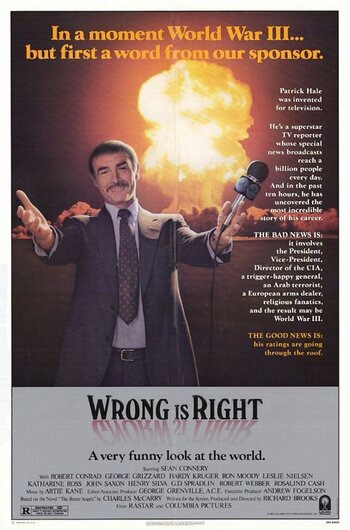 "Nothing happens unless it happens on television."
Advertisement:

A film adaptation of Charles McCarry's novel The Better Angels, this 1982 political satire on the connections between the media, governments and politically-motivated violence was a critical and audience flop until its uncanny resemblance to events post-9/11 brought it to public attention again.

Patrick Hale (Sean Connery) is a superstar reporter for World Television Network at a time when the news has become more about entertainment than reporting. While in the North African country of Hagreb to interview its ruler, King Awad, he discovers that Awad is about to buy two suitcase nukes for terrorist leader Rafeeq (Henry Silva) to use against America and Israel. US President Lockwood (George Grizzard) authorises the CIA to assassinate Awad which puts an end to the scheme, but the outrage over his death enables Rafeeq to seize power in Hagreb, and soon terrorists, the CIA, WTN, and Lockwood's political opponent Senator Mallory (Leslie Nielsen) are scrambling to get hold of the nukes for their own ends.