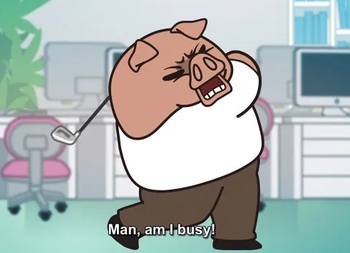 You certainly are.
Advertisement:

One sure sign of being an out-of-touch upper echelon manager or mafioso is that you bring your golf clubs to work, so you can practice your putting rather than actually pay attention to anyone who's talking to you.

For this very leisurely game, a small, flat field is set up in the office, sometimes with an actual hole but most of the time using a cup or a mug.

If the executive in question has a bit of a temper, the golf club might turn out to be a Chekhov's Gun. At the very least, deftly practicing your swing while a nervous underling sits by your desk is a good way to get him good and intimidated.

Compare Office Sports, which are apt to be played by bored cubicle monkeys rather than bored executives.