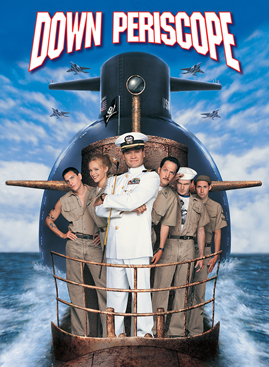 Down Periscope is a 1996 comedy movie starring Kelsey Grammer as Lieutenant Commander Thomas Dodge USN, Executive Officer of the Los Angeles-class nuclear-powered fast attack submarine USS Orlando. Though considered by many to be a talented officer, he has been denied command of his own submarine twice for his... cavalier command style. A third denial will forever bar him from commanding a submarine.
Advertisement:

But Vice Admiral Winslow has a feeling that summarily dismissing an officer like Dodge would be a bad thing, and has come up with a method of proving it — a war game which pits USS Stingray, one of the last remaining diesel submarines still owned by the US Navy (and long since forgotten in the Mothball Fleet at that), against the East Coast nuclear navy. Dodge's assignment — simulate a terrorist strike against Charleston and Norfolk.

However, his opponent, Rear Admiral Graham, doesn't think the Navy needs irrepressible screwups like Dodge, and is willing to stretch the rules to the breaking point to prove it — starting by giving said screwup the crew he believes such a screwup deserves — ultimately a mistake that will make a laughing stock of the U.S. nuclear navy, as Admiral Winslow has explicitly ordered Dodge to "think like a pirate" to show that most of the world doesn't play by the book, and that's exactly what Dodge is going to do.

Notably Lt. Emily Lake (Lauren Holly) is supposed to be the first female submarine crew member in the history of the United States Navy. She is a Diving Officer.

The film is a parody of Up Periscope and other films in the submarine-film genre.