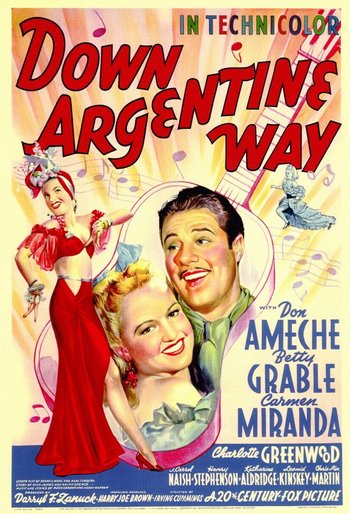 Glenda Crawford (Grable) wants to buy Ricardo Quintana’s (Ameche) beautiful mare, Carmelita; however, a feud between their fathers doesn’t let Ricardo sell the mare to her even though both are smitten with each other. Disappointed, but deeply fascinated with Ricardo, Glenda goes to Buenos Aires, Argentina, with her Aunt Binnie (Greenwood), to look for a mare and see if she can find Ricardo and angrily tell him off.

Features effervescent performances by Carmen Miranda (her first American film appearance) and the Nicholas Brothers. This was also the star-making role for Betty Grable who would spend the rest of the war years as the pin-up girl of choice for American GIs.

This film was not only a financial success, but also a piece of propaganda: President Roosevelt’s “Good Neighbour Policy” was currently in effect during World War II, trying to show Latin Americans in a good light, to help avoid their Nazi affiliations. However, the film was disliked in Argentina for being more of a mesh of Afro-Caribbean and Mexican influences, rather than authentically Argentinian. However, the film still sparkles with beautiful cinematography and choreography.

In 2014, Down Argentine Way was chosen by the National Film Registry for preservation.