Film / Down and Out in Beverly Hills 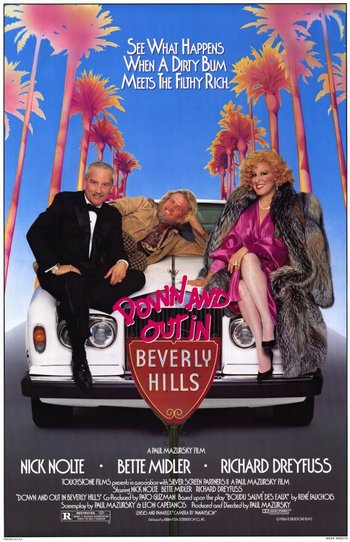 Down and Out in Beverly Hills is a 1986 comedy film directed by Paul Mazursky and starring Nick Nolte, Richard Dreyfuss, and Bette Midler.

It tells the story of Jerry Baskin (Nolte), a homeless man who befriends the wealthy-but-stressed-out Dave Whiteman (Dreyfuss) and his equally stressed-out family after trying to drown himself in their pool.

This was the first Disney-produced movie (via Touchstone Pictures) to get an R rating. The subsequent TV series in 1987 attained another first; it was the first series to be cancelled by Fox.

Not to be confused with the 1998 film Slums of Beverly Hills.