Film / The Gang's All Here 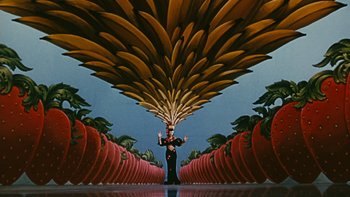 The Gang's All Here is a 1943 musical film directed by Busby Berkeley, starring Alice Faye and Carmen Miranda.

Andrew Mason Jr. (James Ellison) is a young man from an extremely rich family who has enlisted in the Army and is about to go off to active duty in World War II. The night before Andy's due to ship out, he goes to the Club New Yorker and catches a spectacular stage show starring Brazilian firecracker Dorita (Carmen Miranda). Andy becomes enchanted with Eadie Allen (Alice Faye), a singer in the show. He gives her his buddy Casey's name as he doesn't want Eadie to know that he's a scion of privilege. Andy follows her to the Hollywood Canteen, where she volunteers, and they wind up spending a romantic evening. He ships out the next day and Eadie, who has already fallen head over heels, promises to write him every day.

What Eadie doesn't know is that Andy is already informally engaged to Vivian Potter, daughter to another wealthy family that is old friends with the Masons. Eadie keeps her promise and writes Andy throughout Andy's service in the Pacific theater. When Andy comes home his father Andrew Mason Sr. (Eugene Pallette) wants to throw him a welcome home party, and the Masons are so rich that they hire a musical troupe to make Andy's party into a big war bond rally. The musical troupe they hire? Dorita and Eadie's, leading to an awkward revelation when Eadie comes to Andy's house and finds out about Vivian, as well as finding out Andy's true identity.

All this is really an excuse for trippy, spectacular Busby Berkeley musical numbers. Berkeley, who received credit both as director and as director of the musical numbers, was directing a Technicolor film for the first time, and really took advantage, filling his movie with a riot of bright colors and hallucinatory imagery.