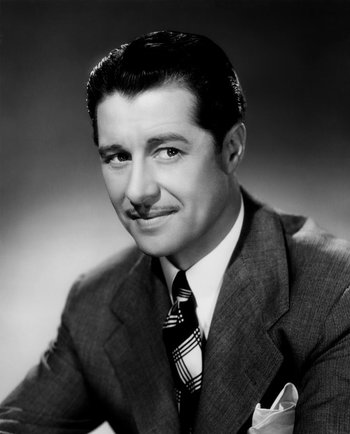 "Remember Don Ameche, the actor? He lives here."
— Cloudy Russo to Popeye Doyle, while staking out an apartment building in The French Connection
Advertisement:

Don Ameche (born Dominic Felix Amici; May 31, 1908 – December 6, 1993) was a famous American actor and singer from The Golden Age of Hollywood who revived his career in his twilight years.

Born in Kenosha, Wisconsin to an Italian father and Irish-German mother, Ameche was one of eight children. His original career path was to become a lawyer, but the acting bug caught him at an early age in university. A chance role in a theatre production geared his focus entirely on acting. His Hollywood career began in radio, but eventually, 20th Century Fox studio head Darryl F. Zanuck discovered him and put him in several film roles. In the mid to late 1930s he co-starred in a number of successful musical comedies, usually starring Tyrone Power and Alice Faye. There he showcased his urbane charm, delightful baritone, and pencil moustache.

Ameche was at the top of his game in the late '30s and early '40s. His famous roles included The Story of Alexander Graham Bell, which made Ameche's name synonymous with the telephone; Midnight, for which he was loaned out to Paramount and co-starred with Claudette Colbert; and Alexander's Ragtime Band, where he solidified his leading man status.

In 1940, Ameche was successfully paired with Betty Grable in Down Argentine Way which made Grable a star and was the first film for Portuguese/Brazilian sensation Carmen Miranda.

Although starring in several films by celebrated directors like Ernst Lubitsch and Douglas Sirk, Ameche’s star began to fade. He did, however, continue to work on radio; specifically, the influential serial called The Bickersons with Frances Langford. An interval of around 40 years passed where Ameche was only featured in five films, did a bit of TV, and mostly worked on the stage.

Fortuitously, when Ray Milland dropped out of John Landis' 1983 film Trading Places, Ameche took his place. The rest as they say is history: Ameche experienced a career resurgence that few actors of the Golden Age ever received, after 40 years of film irrelevance. He continued to work steadily throughout his twilight years, gaining critical acclaim right until his death in 1993, at the age of 85.