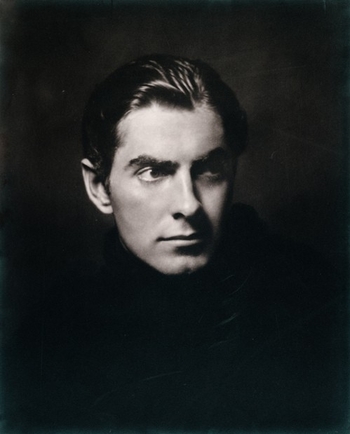 Known for his beautiful smile and devastatingly handsome looks, Tyrone Edmund Power III (May 5, 1914 – November 15, 1958) was a film and stage actor and famed matinee idol during The Golden Age of Hollywood.

Tyrone Power came from an acting family: his father, Tyrone Power Sr., was a well-known silent film and Shakespearian actor and his mother, Helen (neé Reaume), was also a stage actress.note His son, who acts as Tyrone Power, Jr. even though he's really Tyrone Power IV, also became an actor.

Power would follow his family’s footsteps and appeared in Shakespearian plays before coming to Hollywood. At age 22, Power was signed with the newly merged 20th Century Fox who’s studio head, Darryl F. Zanuck, was looking for a leading man. Zanuck cast him in his first starring film role, Lloyd’s of London (1936) which was a smash hit and made Power a bonafide star.

In 1939, he was the second biggest box office draw (after Mickey Rooney, of all people) and crowned the “King of 20th Century Fox”. Power was regularly cast in Swashbuckler films and romantic comedies throughout the end of the 30s and the 1940s. Yet, Power resented his matinee idol status and felt he was never taken seriously due to his good looks. He also wished for more serious, dramatic fair which came very rarely, if ever, under the tight image control of Zanuck.

Power’s career went on hold as World War II rolled in, and he enlisted in the Marine Corps. He came back to the silver screen in 1946 with two exceptions to his light fare, The Razor's Edge and Nightmare Alley (1947). Power had to fight to get the latter role because Zanuck thought his image would be tarnished by such a dark role. But Power managed to convince Zanuck, and the role turned into one of Power’s favourite performances and his best-reviewed film, although it didn’t do well in the box office or make Zanuck very happy.

After his contract with Twentieth Century Fox ended in 1955, Power was a free agent and starred in several plays in England, most notably the stage version of Mister Roberts. A career high came with Billy Wilder’s Witness for the Prosecution: Power received rave reviews and was proud of the film, but it turned out to be his last one.

He was originally cast in 1958's Solomon and Sheba as King Solomon, until he collapsed in the midst of a duelling scene with George Sanders, complaining of a pain in his left arm. Power walked off to his trailer, where he died of a heart attack, aged only 44. The producers decided to re-cast and re-shoot the role of Solomon with Yul Brynner, though he's still visible in some long shots.

In other media, Power is featured on the The Beatles' famous Sgt. Pepper's Lonely Hearts Club Band album cover.