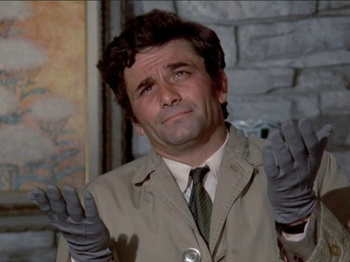 "Suitable for Framing" is the fourth episode of the first season of Columbo.

Art critic Dale Kingston (Ross Martin) comes home to his uncle Rudy's mansion one night and shoots Rudy dead as Rudy plays piano. Right after he does the doorbell rings—but it's his girlfriend Tracy (Rosanna Huffman), who is his partner in crime. Together they stage an elaborate cover-up, trashing Rudy's house, stealing some paintings from Rudy's art collection, and using an electric blanket to keep Rudy's corpse warm and thus deceive the cops about his time of death. With the warmth of the body to make police think Rudy was killed later than he really was, Dale goes to an art showing and makes sure he is seen. But of course Lt. Columbo is not fooled, not even when Dale tries to steer suspicion towards Edna (Kim Hunter), Rudy's ex-wife, who just inherited Rudy's obscenely valuable art collection.

Don Ameche has a supporting part as Edna's lawyer.

Advertisement:
Dale: Don’t you think you should [investigate Edna’s house]? I mean, for her protection. Then when you fail to find the paintings, you can cross her name off the list entirely.
Columbo: Well, it hardly seems worth the trouble. Neither of us think she’s guilty, why bother?
Feedback