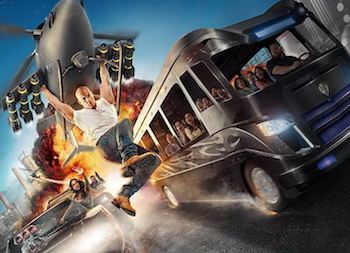 Based directly off of The Fast and the Furious film series, the ride places guest inside the characters' latest hideout inside San Francisco, where there the guests will be escorted by a "party bus" to an after-party of Dom's recent racing victory. Things fall into complication when it turns out that one of the guests is actually a crime witness under protective custody, who Owen Shaw, leader of an international crime syndicate, wants to get his hands on. As a result of this, the main protagonists are forced to defend the lone witness from Shaw and his forces while also trying to avoid crossing paths with the FBI, a conflict that ultimately ends up thrusting riders into the middle of an action-packed road battle in the city highways.

The ride opened on April 23, 2018, on the former site of both Disaster! and Beetlejuice's Graveyard Revue. Unfortunately, it opened to disastrous reviews, being seen as a poor replacement for the two rides. It does get praise for its lovingly detailed queue, though, and for some people its cheesiness gives it a certain charm.

Tropes in Fast & Furious: Supercharged include: