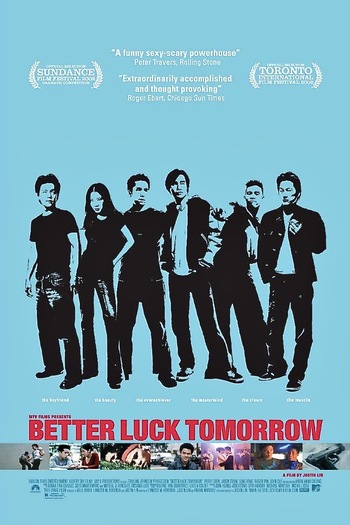 Set in suburban Orange County, California, the film follows a group of high-achieving Asian American high schoolers who turn to a life of crime out of boredom and dissatisfaction with their lives. This lifestyle sprials out of control, leading to eventual murder. The film was loosely based on the murder of Stuart Tay

Ben (Parry Shen) is a straight-A student who wants nothing more than to make the school basketball team, get with his cheerleader crush Stephanie (Karin Anna Cheung), and get into an Ivy League school. After Big Man on Campus Daric (Roger Fan) messes things up for him on the basketball team, however, Ben ends up agreeing to take part in a test-cribbing scam. Ben's goofy childhood best friend Virgil (Jason Tobin) and Virgil's stoic cousin Han (Sung Kang) also get involved, and their gang soon expands to all sorts of criminal activities. Meanwhile, Ben competes with Stephanie's boyfriend Steve (John Cho), a private school kid with a strange outlook on life, for her affections. But as their crimes become bigger and their lifestyle more hedonistic, things take a violent turn...

The film's also notable for featuring the first appearance of Han Lue (played by Sung Kang), whom Justin Lin would later introduce to The Fast and the Furious franchise in Tokyo Drift.