Film / The Fast and the Furious: Tokyo Drift 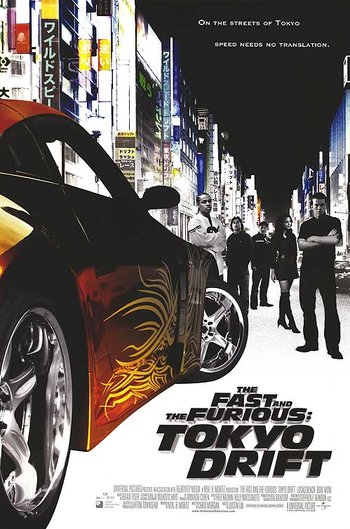 "I wonder if you know
How they live in Tokyo..."
"There's no wax on, wax off in drifting. The first drifters invented drifting out here in the mountains by feeling it. So feel it!"
— Han Seoul-Oh
Advertisement:

Black plays teenager Sean Boswell, who accumulates some serious motor vehicle violations that could earn him jail time. To keep him out of trouble, he is sent to live with his U.S. naval officer father in Japan and finish school there. The culture clash is brutal, especially when he gets friendly with the girlfriend of a guy with Yakuza connections and a love of the drift races.

While it was theatrically released after 2 Fast 2 Furious and followed by Fast & Furious in release order, chronologically, it's set after Fast & Furious 6. Has nothing to do with Tokyo Drifter.