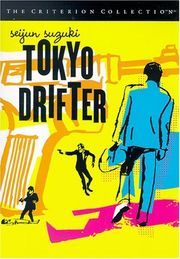 Tetsuya "Phoenix Tetsu" Hondo is a young ex-Yakuza. He's an ex-Yakuza because his old boss, Kurata, went straight, dissolving the gang and buying a nightclub. Tetsu is wandering around Japan pursued by members of the rival Otsuka gang who, having failed to recruit Tetsu after Kurata retired, are not willing to let him run around loose on his own. But until they catch him he's the Tokyo Drifter, traveling Japan leaving a trail of bodies and betrayal in his wake.

One of the last Yakuza films maverick Japanese film director Seijun Suzuki made for Nikkatsu, Tokyo Drifter exhibits all of the features of Suzuki's iconoclastic style, which gleefully skewered classic yakuza genre tropes with dark humor, pop-art visuals and rule-of-cool sensibilities. Nikkatsu studios drastically reduced Tokyo Drifter's budget in a vain attempt to rein Suzuki in but this only caused him get even more creative. Suzuki responded by stripping the story down to its bare essentials, eliminating connecting shots through clever camera work, and building the film around a series of long establishing shots of star Tetsuya Watari in a rather distinctive and modish light blue suit wandering around in the snow. Though not a big success when originally released (lending credence to Nikkatsu's charge that Suzuki's films "make no money and make no sense") it has since become a Cult Classic and Suzuki's absurdist and bare-bones style would become influential among a younger generation of directors, most notably Quentin Tarantino.

Has nothing to do with The Fast and the Furious: Tokyo Drift.