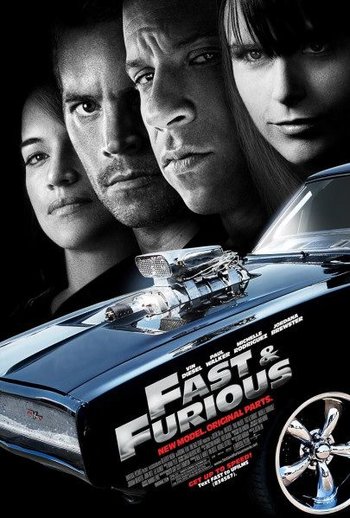 "You asked me why I let Dom go. I did it, because at that moment, I respected him more than I did myself. One thing I've learned from Dom is that nothing really matters unless you have a code."
— Brian O'Conner
Advertisement:

Fast & Furious, also known as F&F 4 to avoid confusion with the first movie and the franchise as a whole, is the fourth film in The Fast Saga. Acting as something of a Soft Reboot of the franchise after The Fast and the Furious: Tokyo Drift under preformed. Released in Spring 2009 with Vin Diesel, Paul Walker, Michelle Rodriguez, Jordana Brewster and Sung Kang reprising their previous roles.

It's been five years and Brian has returned to Los Angeles law enforcement, this time as an FBI agent hunting another drug dealer. Meanwhile, Dom has left his crew, only to get thrust into the world of racing once again when his girlfriend, Letty, is killed while working undercover for the same drug dealer. Brian reunites with Dom, offering him a pardon in exchange for help catching the drug dealer. However, tension heats up when their personal motivations are revealed as Brian, Dom, and Mia struggle to work through the residual complications of their last encounter with each other.

Chronologically it's set after 2 Fast 2 Furious with Fast Five immediately following it.