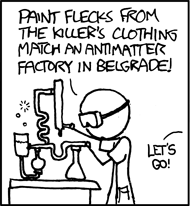 "I see you found the crumb. I knew you wouldn't notice the enormous flag."
— Negaduck, Darkwing Duck, "Just Us Justice Ducks, Part 1"
Advertisement:

So your investigation seems to have hit a dead end. Either you have no prints, or you stumbled across a Red Herring, either way the situation seems hopeless...

But wait! The guys at the lab have found the clue you were looking for! Turns out some of the trace in the crime scene is a rare plant that can only be found in a certain part of your town! Or sand that comes from a specific island that one of the suspects has visited recently! Either way, now you're certain where to go. The Lab Rats have stumbled across GPS Evidence.

GPS Evidence is able to pinpoint a certain geographical location with amazing accuracy. It points straight to either the location the heroes are trying to find, or the person they are seeking (if said person was the only person who visited the place that the evidence pinpoints).

While this can border on Deus ex Machina if done badly, the Real Life examples show that there is some Truth in Television to it. Usually goes hand in hand with Sherlock Scan. But compare Sherlock Can Read if what you actually found was a piece of text labeling the thing's location.