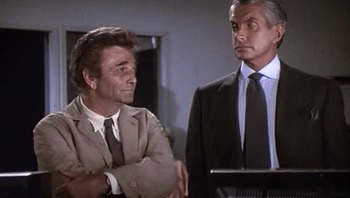 Wade Anders will soon be a villain on his own show!
Episode: Season 10, Episode 2
Title:"Caution: Murder Can Be Hazardous to Your Health"
Directed by: Daryl Duke
Written by: Sonia Wolf, Patricia Ford, and April Raynell
Air Date: February 20, 1991
Previous: Columbo Goes to College
Next: Columbo and the Murder of a Rock Star
Guest Starring: George Hamilton
Advertisement:

"Caution: Murder Can Be Hazardous to Your Health" is the second episode of the tenth season of Columbo.

Wade Anders (George Hamilton) is the host of Crime Alert!, a true-crime TV series that re-enacts crimes, shows pictures of wanted criminals, and sometimes actually covers the arrests of bad guys. Wade is handsome and successful, and he's got a super tan. Life is good.

Life is good except for one little problem, in the person of Bud Clarke (Wade Haskell), a newscaster and rival of Wade's at the network. Bud was thought to be the first choice for Crime Alert! and he wanted the job very badly, but Wade spread a lot of stories about Bud's drinking habit and aced him out of the job. A bitter Bud has found a really good piece of dirt on Wade: a pornographic film that a young Wade starred in years ago, with an underaged female co-star.

Bud demands Wade quit Crime Alert!, or Bud will make the tape public and Wade will lose his job in a scandal. Wade has a different idea. Bud is a chain smoker, so Wade takes a pack of Bud's brand of cigarettes and laces them with concentrated nicotine sulfate, a very deadly poison. While the two of them are having a secret meeting to arrange the terms of Wade's departure, the poison takes effect and kills Bud. Wade switches out the tainted cigarettes for some untainted ones, erases the incriminating story on Bud's computer, and leaves unseen.

But of course he didn't know about Lt. Columbo of the LAPD, who wonders why there are no nicotine stains on the filters of the cigarettes in the ashtray, or why there are no fingerprints on the back side of the paper Bud supposedly printed out.