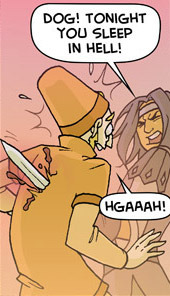 "When you kill your enemy, you wanna look straight in his eyes so he knows that you're the one who beat him to death! It also gives you a chance to deal out some really zippy one-liners. Like, 'I hope you brought your wallet, 'cause the rent in Hell gets paid in advance!' Or my personal favorite, 'You just got Sarged!'"
— Sarge, Red vs. Blue
Advertisement:

What's better than killing your most hated enemy? Sending them into the afterlife with your voice in their ears and the proof of your badassery in their head, that's what.

Alternatively, the quote can be said in that short window of time after the killing blow is struck, but before your enemy's consciousness fades, as a metaphorical way of adding salt to the wound. Be warned, however, that if your enemy still has motor control, the quote might be the proverbial nail that spurs them to pull off a Taking You with Me.

Give My Regards in the Next World and See You in Hell are subtropes. Compare Bond One-Liner (aka Post-Mortem One-Liner), which is said after the victim's consciousness has faded, and directed at the audience, to another character, or just to oneself. If the victim is the one speaking, it's Defiant to the End or "Facing the Bullets" One-Liner.

Gunship diplomacy has little effect on a Mandalorian.

Gunship diplomacy has little effect on a Mandalorian.