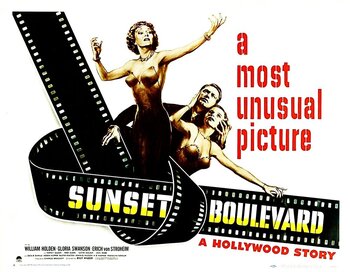 A classic 1950 Film Noir directed by Billy Wilder, Sunset Boulevard is a dark meditation on the film industry and the fleeting nature of fame, and to this day one of Hollywood's most scorching (yet wistful) depictions of itself. While the characters are deeply flawed, in some cases beyond any redemption, the film still manages to present them all as complex, sympathetic, and even endearing. It is generally regarded as one of the best films of all time.

As the film opens, an as-yet-unidentified man has been found dead, floating face-down in a pool in the backyard of an enormous Hollywood mansion on Sunset Boulevard. Our narrator, a jaded and struggling screenwriter named Joe Gillis (William Holden), takes us back and tells us How We Got Here.

Some months earlier Joe, blindly fleeing his creditors, winds up in what appears to be an abandoned mansion, only to find that silent movie great Norma Desmond (Gloria Swanson) still lives there with her Austrian manservant, Max von Mayerling (Erich von Stroheim). The delusional Norma believes that her adoring fans still desperately want her to return to the screen, more than two decades after the advent of "talkies" rendered her and every other silent-film star on the block obsolete. Once Norma learns that Joe is a screenwriter, she offers him room, board and refuge from his creditors...in exchange for his help in revising the truly hopeless screenplay she's been writing for twenty years to prepare for her return.

At first, Joe sees her as a sap he can use to bide time and make some easy cash, but it becomes increasingly blurred just who's playing whom. More and more, he's trapped in his gilded cage: Norma buys him expensive things but never actually pays him, leaving him more and more dependent on her every fickle whim. Convinced her script — which is juvenile, trashy, and hours too long — will restore her to her rightful place as the greatest star of her day, she puts herself through a strict and at times absurd regimen to prepare herself for her return. She chooses to forget that she's now fifty rather than twenty-five... and for a Hollywood beauty queen, fifty might as well be one hundred.

Meanwhile, in secret, Joe has been working with Betty Schaefer (Nancy Olson), an attractive young female screenwriter, on another script — a script Joe sees as his redemption in more ways than one. Max, who has a few secrets of his own, appears increasingly annoyed at the attention Norma lavishes on Joe, and at Joe's dismissive attitude toward it. After a failed suicide attempt by Norma on finding out about the Other Woman, things come to a head, leading to a shocking conclusion which is also the film's opening.

In 1993, it was adapted into a musical by Andrew Lloyd Webber. The Broadway premiere starred Glenn Close, and The 1996 Australian premiere in Melbourne showcased a relative unknown named Hugh Jackman, who played Joe Gillis opposite Debra Byrne as Norma Desmond, who, at the time, was ironically Australia's own White-Dwarf Starlet. It won the 1995 Tony Award for Best Musical, in a year in which only one other show was even nominated. The musical returned to Broadway in 2017, still starring Glenn Close. In 2019, it was announced that a film version of the musical — with Close once again reprising her role from the stage production — had entered development. However, it was delayed twice — first to October 2020, and then to early 2021 — due to the COVID-19 Pandemic.

The musical also contains examples of: