Film / Sunny Side Up 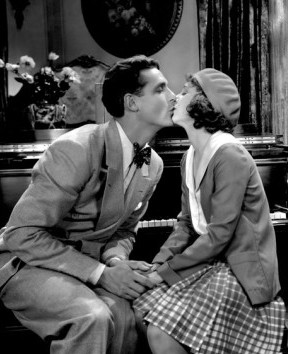 Let your laughter come through, do/Stand up on your legs/Be like two fried eggs/Keep your sunny side up!
Advertisement:

Sunny Side Up (1929) is an early Romantic Comedy Musical, starring Janet Gaynor and Charles Farrell, directed by David Butler. The songs and script were written by DeSylva, Brown, and Henderson.

It’s the Fourth of July, and the New York tenements are having a block party; before the party really gets going, Molly (Gaynor) accidentally meets her crush, millionaire Jack Cromwell (Farrell). They hit it off big time, and Jack is impressed with her singing, so he invites her to Southampton, where he can use her talents for a carnival show and, most importantly, to make his fiancée, Jane, jealous.

Musical numbers and Will They or Won't They? ensues.

This is the fifth team up (out of their 12 films) between Gaynor and Farrell, and it’s the first film to show off their voices, too. Unlike other musical films of the time, this one has the distinction to have decent camera work for the early sound era, and four hits, including “(Keep Your) Sunnyside Up,” “I’m a Dreamer, Aren’t We All," “Turn on the Heat,” and “If I Had a Talking Picture of You.”

Sunny Side Up demonstrates the following tropes: