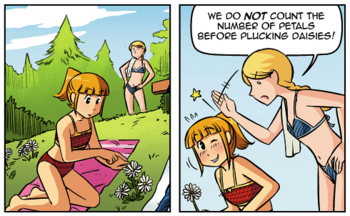 "I don't think you should take relationship advice from members of the species Bellis perennis."
He loves me, he loves me not, he loves me…
Advertisement:

A character plucks something in order to predict something.

The character is usually a girl, but doesn't have to be.

This trope comes in two flavors:

As humans are more inclined to start with the affirmative (in this case "Loves me"), and since Real Life flowers are slightly more likely to have an odd number of petals, probability indicates that of all the people who did this the majority of them ended with "Loves me". In the land of fiction though, the Rule of Drama skews this and fictional characters tend to end with "Loves me not".