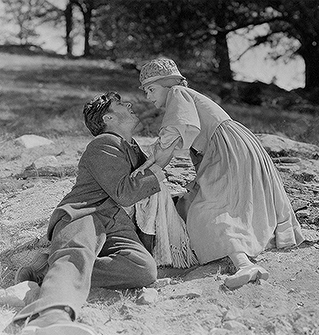 "This song of the Man and his Wife is of no place and every place; you might hear it anywhere at any time. For wherever the sun rises and sets in the city's turmoil or under the open sky on the farm, life is much the same; sometimes bitter, sometimes sweet."
— Opening title card
Advertisement:

Sunrise: A Song of Two Humans is a 1927 silent drama film directed by F. W. Murnau. It was his first American film and won two Oscars at the inaugural Academy Award ceremony: Best Cinematography and Best Artistic Quality of Production (an alternate Best Picture award that existed only that year). It is perhaps best known for its massive critical acclaim (even over 90 years later) and for either inventing or perfecting many of the camera, special effects and storytelling techniques we take for granted now.

The story follows a rural man (George O'Brien) who, under the influence of an urban temptress (Margaret Livingston), plans to kill his wife (Janet Gaynor) by pushing her out of a boat. He can't go through with it, though: the couple continue their boat ride to The City, where they reconcile and have a day's worth of innocent adventures. But A Storm Is Coming...

Sunrise is considered a stylistic masterpiece and is the Ur-Example, Trope Maker or Trope Codifier of many now-common camera and special effects techniques like Epic Tracking Shot and Forced Perspective. Its lyrical camera movement and minimal use of intertitles are typical of Murnau, and German Expressionist influence shows in the oversized sets of the amusement park where much of the film takes place and in the juxtaposition of outdoorsy tactile details with soundstage artificiality in the village scenes. But the setting is not disturbing in itself, as it is in many German Expressionist films (the fractured brainscapes of The Cabinet of Dr. Caligari, the cold machine-world of Metropolis, the corrupt antiquation of Murnau's own Nosferatu). Instead, it functions as an unobtrusive, archetypal backdrop for what is in essence a modern fable.

Janet Gaynor won the first-ever Academy Award for Best Actress for this film, as well as 7th Heaven and Street Angel (at that first ceremony, the acting awards were given for one's body of work during the year).

Adaptation of German short story "Die Riese nacht Tilsit". In 1939 the original story was adapted into a German film, Die Reise nach Tilsit. Sunrise was selected for preservation in the inaugural year of the Library of Congress's National Film Registry (1989).