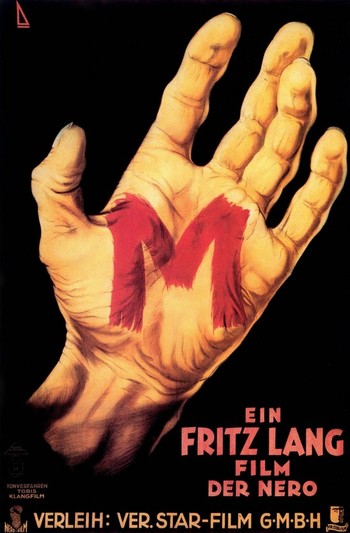 "Just you wait, it won't be long.
The man in black will soon be here.
With his cleaver's blade so true.
He'll make mincemeat out of YOU!"
Advertisement:

M (original German title M – Eine Stadt sucht einen Mörder, "A City Searches for a Murderer") is a 1931 crime film written and directed by Fritz Lang, from a script co-written by his then-wife Thea von Harbou.

Lang's first sound film, it is about a serial child killer in Weimar Republic-era Berlin and the people who try to find him: the police, the criminal underworld, and the city's beggars. One of the earliest examples of Film Noir, M provides stark black-and-white imagery along with a haunting leitmotif heard throughout the film.

As the film opens, that leitmotif — "In the Hall of the Mountain King", from Edvard Grieg's Peer Gynt — is whistled by Hans Beckert (Peter Lorre), as he buys a balloon for a little girl named Elsie Beckmann from a blind street vendor. A scene later, Elsie hasn't come home from school and her worried mother shouts her name as the camera shows the abandoned balloon drifting up into the telephone wires.

Police inspector Karl Lohmann (Otto Wernicke), meanwhile, is investigating the serial killings with modern policework, such as fingerprinting and handwriting analysis. The criminal underworld is also searching for the killer, since more police on the street is bad business for them and they, too, are disgusted by the killer targeting children.

The film is widely regarded as an important masterpiece in the history of cinema, and Lang himself considered it to be his Magnum Opus. It also catapulted Peter Lorre to screen stardom.

Remade in the U.S. in 1951, in a version directed by Joseph Losey, starring David Wayne as the murderer and updating the setting to postwar Los Angeles. There was another remake in the form of a 2019 Austrian Mini Series by TVNOW (M – Eine Stadt sucht einen Mörder), starring Sarah Viktoria Frick, Christian Doleza, Lore Niklas, Gerhard Liebmann (as M), Moritz Bleibtreu and Udo Kier. It too updates the setting, to Present Day Vienna.