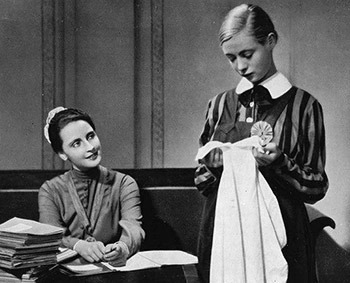 ”What you call sin, Headmistress, is what I call the spirit of love. It takes on a thousand forms.”
— Fräulein von Bernburg
Advertisement:

Mädchen in Uniform is a classic of German cinema from 1931, directed by Leontine Sagan. It's based on the play Gestern und Heute (Yesterday and Today) by Christa Winsloe and it also became one of the first movies to explore the subjects of lesbian romance and Teacher/Student Romance. It had an all-female cast and was ground-breaking not only for its portrayal of said lesbian and pedagogical eros, but also for its co-operative and profit-sharing financial arrangements (despite the fact that the profits had been mostly retained by producers).

Manuela von Meinhardis, a new student at a Prussian boarding school, is sent to a dorm run by Fräulein von Bernburg, a teacher on whom all the girls in the school have a crush. Manuela goes a little further than most, actually falling in love with von Bernburg, which seriously jeopardizes their lives at the school.

A remake was made in 1958, starring Lilli Palmer and Romy Schneider.