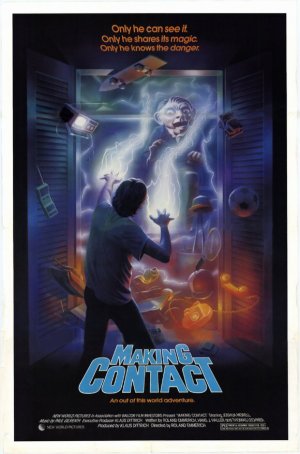 A 1985 German film written and directed by Roland Emmerich prior to making his big move to Hollywood.

Young Joey Collins is a regular kid whose father has recently died. He has difficulty dealing with his dad's death. After a heartfelt wish for his deceased parent to return, he begins getting phone calls from his dead dad... on a toy telephone that isn't connected to anything. In addition, Joey begins developing psychic powers and telekinesis, which he tells his concerned mother Laura and schoolteacher Martin that were taught to him by his ghostly father. The toys in his bedroom also come to life at random intervals, and one of them, a toy robot named Charlie, stays alive and befriends Joey.

One day, Joey's life is turned upside-down when he decides to explore the condemned, burned-out house of a long dead magician. Here, he stumbles across an old ventriloquist dummy named Fletcher, and takes him home. But when Joey isn't around, much to Charlie the robot's dismay, Fletcher opens his eyes... and growls. The evil dummy has powers of his own and becomes hellbent on preventing Joey from making contact with his dad's ghost for some reason, and just generally causing chaos and mayhem.

It was filmed in the US with English-speaking German actors and released there under the title Making Contact. A longer cut, dubbed into German, was released to theaters in Emmerich's native Germany under the title Joey. The German cut runs twenty minutes longer than the US one and has a more ambiguous ending than the American version. Although it contains a different story from them, it contains numerous references to the earlier films of Steven Spielberg and George Lucas (in particular Star Wars and E.T. the Extra-Terrestrial).