Film / Man of the World 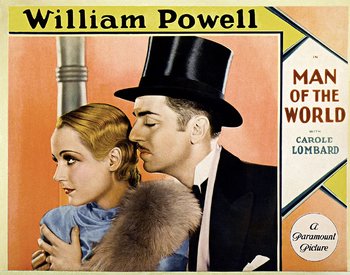 Man of the World is a 1931 film directed by Richard Wallace.

Michael Trevor (William Powell) is a former journalist now living as an ex-pat in Paris, because something happened which forced him to leave America. He is now making his living as a blackmailer. Michael and his partners Irene and Frank print their own little gossip sheet which circles among the American ex-pat community in Paris. The racket is that Michael and partners find out embarrassing secrets about American tourists. (Or in the case of Irene, they cause those secrets by being a Honey Pot.) Michael then goes to the target, and in a roundabout way threatens to publish the details of the scandal in his gossip rag. The victim always gives Michael some cash to make the embarrassing thing go away.

Enter Mary Kendall, a beautiful American socialite (Carole Lombard) in Paris to visit her rich uncle Harry. Irene, who needs a big score to keep her brother back in America out of jail, hits on an idea. Michael will seduce gullible Mary, and then extort $10K from Harry to avoid the ruin of Mary's reputation.

Naturally, Michael falls in love with Mary for real. Irene does not like this, because she wants the ten grand, and because she's also Michael's ex-girlfriend.